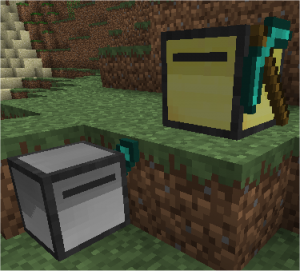 Turtles and Advanced Turtles are essentially robots, and were added in the 1.3 update. They have the ability to place, break and detect blocks, move around and drop items in their inventory via their access to the Turtle API. The programs they run are stored in their internal memory, or on floppy disks.

The 1.4 update was focused on turtles, and expanded their ability to use tools. Turtles are capable of using pickaxes, hoes, axes, shovels and swords. The update added "Crafty Turtles", which have the ability to craft using their inventory - and part of this upgrade saw the number of inventory slots in the Turtle raised to 16 from the previous 9 slot inventory. The 1.4 update also included a new fuel system for the turtles.

The 1.55 update added Advanced Turtles - made of gold, are able to display color, and have mouse input available through their display. Their exterior appearance is also of gold. They're just like Advanced Computers, but with a smaller screen.

Prior to 1.6, turtles had to have tools manually attached via crafting. As of that update, they are now also able to swap tools in and out of their inventory at will. That build also brought in caps to the arbitrarily large fuel values turtles could previously store - by default, they are now 20,000 units for regular turtles and 100,000 for advanced.

Turtles are submersible and lavaproof. As such, they are extremely useful for mining near bedrock, where heavy lava flows can prevent access to diamonds and other rare finds.

If you would like to know more about how to program them, have a look at the Turtle API.

Keep in mind that when turtles are 'mined', picked up, and placed somewhere else, they will not keep their programs unless they have been given a label. To do so, you simply need to type in "label set <labelName>" at the shell prompt.

Turtles do not have a built-in Disk Drive. As such, they need a Disk Drive placed beside them to access Floppy Disks. However, if the Turtle is of the Wireless family, the Disk Drive (and other peripherals) must be placed on a side other than the side the wireless modem is on. Any other peripherals, such as Monitors and Printers can be interacted using the peripheral API.

Turtles require fuel to operate - this means Turtles must be powered from any item that works in a regular furnace, like coal and lava. The turtle gains 0.6 "movement" per half second the fuel would have burnt in a furnace. The Turtle can move 1 block for each fuel count it has, for example, coal yields 80 block movements.

In this mode, Turtles use their internal Redstone Engine, and as such, they do not need to be re-charged, or receive any other form of external power. This is because Redstone continuously emits low levels of energy, and the Turtle's engine is very efficient. This mode can be turned on by editing ComputerCraft.cfg and setting turtleNeedsFuel to false.

As of ComputerCraft 1.63 Turtles can be dyed using Dyes. It supports all 16 different colors, so you can have a green Farming Turtle harvesting some melons and a gray Mining Turtle gathering materials and mining ores.

Turtles equipped with a diamond hoe can till dirt so it can later be used for Farming. An example of a use for this would be using it to till, plant, and harvest your wheat farm and dropping any product in a chest for you.

Turtles crafted with a diamond pickaxe, diamond axe, or diamond shovel, can break blocks, chop wood, mine stone and ores, and even break dirt and gravel (depending on the tool you used on it). The tools equipped on the Turtle have no durability, and so can be used indefinitely without the need for any additional materials. When a Turtle breaks the block, the Turtle receives the item directly into it's inventory. Different tools yield different drops - for example, an axe can break anything, but it won't drop ores.

Turtles with a Crafting Table can craft items if they have the correct materials to do so, and all other slots outside the crafting-zone are empty.

Turtles equipped with a diamond sword can attack players and mobs. When a Turtle kills a mob it will leave the experience orbs on the ground, but add the loot to its inventory. Turtles can also attack with any tool, where the diamond axe is the second best after the diamond sword.

In special inventories, with just a few slots on the top or bottom - for example furnaces - you can specify which slot to place an item in by positioning the turtle in the corresponding location to the front face of the inventory. For example in a furnace, you would use a turtle at the bottom of the furnace for it to place fuel in the furnace, a turtle at the top to place objects to smelt, and a turtle to the right to retrieve the smelted objects (Note that you can do this with just 1 turtle moving around).

Just like a Computer, a Turtle can be used as a peripheral. You can find all Turtle peripheral functions here.

Note: NEI has been known to present the recipe for an advanced turtle as requiring a normal computer, somehow ignoring the actual recipe.

Turtles can be equipped with different peripherals and tools. A turtle can be crafted with any combination of tools and peripherals. Turtles may later use turtle.equipLeft() / turtle.equipRight() to add, remove or exchange tools in any combination.
The following tools can be equipped to a turtles: diamond pickaxe, diamond axe, diamond shovel, diamond hoe and diamond sword
The following peripherals can be equipped to a turtles: wireless modems, ender modems and crafting tables.
Diamond tools must be unused (i.e. not have a durability bar showing) an unenchanted to combine with a turtle.

Turtle recipe and examples for equipping a turtle with tools and peripherals (Note that any variants of the turtle can also be crafted with the Advanced Turtle):