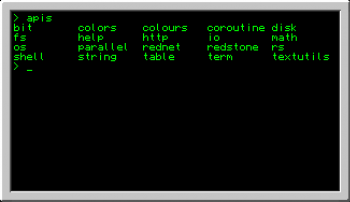 API's being listed with the 'apis' command run in a computer.
An API (Application Programming Interface) is a fairly large block of code inserted or called into a program to ease on the coder. An example is a game development API that adds in features that make game development easier.