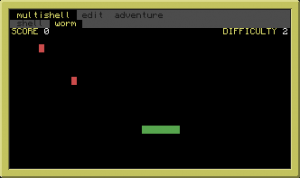 Multiple instances of multishell may run at at time, producing layers of tabs.

As of ComputerCraft 1.6, multishell is a script automatically executed on startup by advanced systems. It allows easy use of multiple tabs of processes running on the one unit at the same time. By default, it launches just the one tab, running either CraftOS or TurtleOS - at a glance, a system with multishell looks identical to a system without, until such time as multiple tabs are running (at which point a menu bar appears).

Additional tabs may be opened by use of the fg or bg commands - supplied with a parameter, they'll launch the specified script in a new tab (in the foreground or background, respectively), or if not, they'll simply launch another shell. You may switch between tabs simply by clicking their titles on the top menu bar. Note that scripts continue to run regardless as to whether they're in the foreground or not.

The multishell system operates by making heavy use of the window API (also introduced by ComputerCraft 1.6). If it is active on a unit, that unit will furthermore have access to the multishell API (plus a couple of extra shell API commands), allowing other scripts to interact with it directly.

Note that the area of the screen taken by up by the menu bar is unavailable to scripts running within tabs. Some scripts may require full screen access to operate correctly - whether or not you'll be warned of this depends on whether the individual script author considered to check the display size, so bear it in mind.